Alex Hunter (London, 27 November 1999) is a fictional footballer who appears in several games of the FIFA series. He was first introduced as the leader character of "The Journey", a single player mode that debuted in FIFA 17. He is portrayed by Adetomiwa Edun, who provides motion capture and voice over for the character. Alex wishes to make his mark in the Premier League and define his own football legacy.

Alex Hunter was born in Clapham, London and took part in youth football on Clapham Common along with his childhood friend Gareth Walker. His grandfather, Jim Hunter, who scored 20 goals in the 1968-1969 season, helps to guide him on his own football path. Alex's mother is a designer while his father was a football player in his youth who suffered an injury and his career cut short.

Alex Hunter takes part in a cup final game along with his best friend Gareth Walker at around 10-11 years of age in 2010 or 2011. The game ends with either Alex or Gareth scoring the winning penalty in a penalty shoot-out. After the game, a scout approaches Alex's grandfather and tells him of his potential. Six years pass and Alex and Gareth are both invited to an exit trial for youth. Alex makes an impression and signs with any Premier League club of his choice. Not long after, Alex discovers that Gareth joins the same team.

Both players play in the club's pre-season tour of the United States, facing off against opponents Real Madrid C.F., Borussia Dortmund, and Paris Saint-Germain. Alex begins the proper season as a substitute. Not long after, Alex's club signs either Harry Kane or Ángel Di María and as a result, Alex is loaned out to either Newcastle United F.C., Aston Villa F.C., or Norwich City F.C.. Alex impresses during the Championship on his load. Once he returns to his parent club, he finds out that his best friend Gareth has left to join the club's rivals.

Alex receives a sponsorship deal from Adidas and receives new boots, a photo shoot, and the chance to appear in an advertisement along with Di Maria. Alex has a successful season in the starting rotation and gets the start in the FA Cup Final. He faces Gareth for the first or second time after his departure from the club. The childhood friends encounter each other in the tunnel before the game begins. Regardless of the result of the game, Alex and Gareth shake hands after the game and rekindle their friendship. Alex returns to his flat and discovers he's been named as a potential player to be called up to the England national football team. 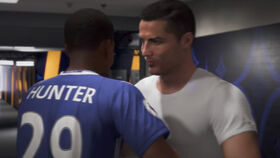 After a successful professional debut, Alex returns as an established player in FIFA 18: The Journey: Hunter Returns. His new goal is to establish himself in international play. Along with Danny Williams, the two play against some Brazilian children during a 3v3 game on holiday. Once returning to England, Alex interviews with Rio Ferdinand. Right after the interview he runs into his old friend Gareth, who couldn't beleive that he's still with his agent, Michael Taylor. Alex's team plays Real Madrid during a pre-season tour in Los Angeles. After the game, he swaps jersey's with Cristiano Ronaldo, who suggests that Alex play for Real Madrid. Alex plays against the Los Angeles Galaxy if they win against Real Madrid and encounters Gyasi Zardes in the tunnel before the game. Alex sees his father during the tour and accepts a dinner invite from him. After the pre-season tour, Alex and his teammates travel to Chicago where they take part in the Major League Soccer All-Star Game.

After the first game of the Premier Season, Michael tells Alex that Real Madrid are seriously interested in him. Alex submits a transfer request. This result's in Alex's teammates and fans losing faith in his commitment to the team. On the day the deal was about to expire, Alex finds out that the interest from Real Madrid was false. Even after an explanation to the club's executive, he is moved to the youth squad. On deadline day, Michael admits he wanted Alex to sign with Real Madrid to enhance his own career, which leaves Alex furious. Alex has the choice to keep him or fire him. Alex gets a call from his father who offers him a contract for the LA Galaxy, which he accepts. During his stay in the United States, Alex discovers he has a half-sister named Kim. Though enraged at his father for not telling him about it, all this time, Alex then supports her during her international debut with the United States women's national soccer team against Germany. Before leaving to return to England, Alex gives Kim their grandfather's football for luck in future matches. Alex reunites with Danny, who signed with Alex's previous club. He learns that Atlético Madrid, Paris Saint-Germain, and FC Bayern Munich are interested in signing him. Alex chooses one of the teams and arrives to find out that Dino, manager of his former club, is at his new club as well. Alex is paired with Thomas Müller, Antoine Griezmann, or Dele Alli as his strike partner. However, Alex suffers a knee injury and misses for most of the season.

Alex recovers and can save the job of Dino by playing well and winning the league or domestic cup. Without either of those victories, Dino is fired. Once the season is over, Alex takes Jim over to the United States to meet Kim. During his visit, he receives a call from an agent, offering to make him an icon.

Alex is set to appear in the final installment of The Journey in FIFA 19, which is titled Journey: Champions. Alex signs for Real Madrid and becomes their star player after the departure of Ronaldo to Juventus F.C..

Alex makes a brief appearance during FIFA 20 Volta story mode, appearing alongside his agent Beatriz Villanova during the New York Volta Invitational tournament. He also gets a photo with Syd. 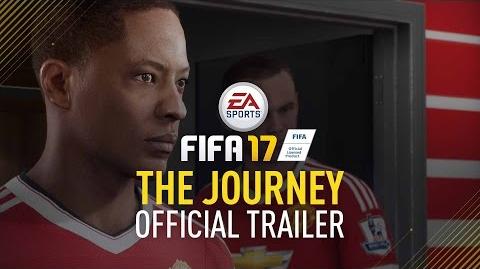 FIFA 17 - The Journey - Official Trailer
Add a photo to this gallery
Retrieved from "https://fifa.fandom.com/wiki/Alex_Hunter?oldid=33912"
Community content is available under CC-BY-SA unless otherwise noted.