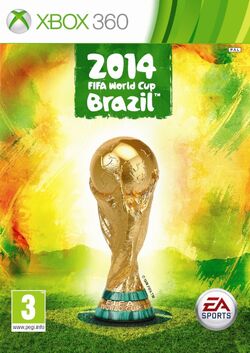 2014 FIFA World Cup Brazil is the official video game for the 2014 FIFA World Cup, published by EA Sports for the PlayStation 3 and Xbox 360. It was released on April 15, 2014 in North America, April 17 in Europe and Australia, and April 24 in Brazil and Japan, as was the case with the 2010 edition.

Gameplay improvements from FIFA 14 include dribbling, an increased accuracy in passing and first-touch mechanics.[citation needed]

The game's campaign mode, Road to the FIFA World Cup, allows players to play through qualification and the actual FIFA World Cup. For only the second time in the history of World Cup video games the entire qualification series will be playable. The 2010 version only presented the UEFA and CONMEBOL groups in their true to life form. Another mode, Road to Rio de Janeiro, will allow players to compete in an online tournament across the 12 venues of the 2014 FIFA World Cup. It is similar in format to Seasons in FIFA 14 and Expedition mode from UEFA Euro 2012.

Retrieved from "https://fifa.fandom.com/wiki/2014_FIFA_World_Cup_Brazil?oldid=34999"
Community content is available under CC-BY-SA unless otherwise noted.